This presentation was put together for the Benefit Dinner of the Rotary Club of the University District of Seattle on April 26, 2009.
It was my involvement with Rotary that inspired me to start Kids Without Borders back in January 2001. Since then Rotary has been one of our biggest supporters. Rotarians from around the U.S and the world have offered their hands and hearts supporting many of our projects and programs. From building new schools, helping orphans, saving sick children, providing clean water, ... Kids Without Borders would not be able to make so many differences in the lives of so many people and children worldwide without the support of Rotary, the most respected service organization in the world.
To all of the Rotary Clubs and Rotarians: THANK YOU.
Son Michael Pham, Founder
KIDS WITHOUT BORDERS
Rotary Centennial Club President
Rotary Club of the University District of Seattle, Washington USA
** Come and visit our club. We meet on Fridays at noon at the Seattle Yacht Club - http://www.urotary.org/ **
Posted by all kids, one world ... at 7:43 PM No comments: 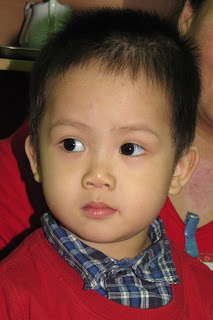 Wednesday, April 22, 2009
YET AGAIN, VIET NAM’S “MIRACLE BABY” DEFIES THE ODDS
Sammamish, Washington - Dubbed the “Miracle Baby”, Vietnamese toddler Phung Thien Nhan, who was abandoned at birth and brutally mauled by wild animals, has once again lived up to his moniker. While it was believed that Thien Nhan’s testicles had been severed in the attack along with all of his penis and his right leg, recent tests performed by Thai specialists at Bangkok’s Preecha Aesthetic Institute revealed that the toddler, who is almost 3, has retained two undescended testicles.

This condition, in which the testicles are tucked up inside the body, exists in only about 3-4 percent of male babies at birth. Had Thien Nhan’s testicles descended normally, they would likely have been lost during the mauling.

Found 72 hours after his teenage mom had left him in a fallow field, his ravaged body covered with blood and ants, the infant was carried for two hours by motorbike over rough mountain roads to the closest hospital in Quang Nam, Vietnam. Somehow he survived, but in a cruel twist of fate was later released to the care of relatives who were unable to care for him.

When Vietnamese journalist Tran Mai Anh, 35, first met the boy, then aged 16 months, he was severely malnourished and suffering from chronic urinary tract, gut and skin infections. “After all that he had been through I could not bear to see him suffering like that,” says Ms. Tran. “I could not sleep at night thinking of him living in those conditions.”

Undaunted by challenges in a country where local adoptions are rare, Ms. Tran and her journalist husband Phung Quang Nghinh managed to legally adopt Thien Nhan when he was 20 months old. The child now lives in Hanoi along with the family’s two biological sons, aged 4 and 8. “At first Nhan was like a wild animal,” recalls Ms. Tran. “All he knew how to eat was cold rice and bananas. But he soon began to gain weight and his terrible rashes cleared up. He is now very bright, active and talkative.”

In August 2008, the Seattle-based charity Kids Without Borders and American philanthropist and longtime Hanoi resident Greig Craft helped to arrange urethral surgery for Thien Nhan at Dartmouth University Hospital in the United States. Thanks to this operation, for the first time in his young life Thien Nhan could urinate free of pain.

“Thien Nhan has overcome a great deal but many more challenges remain,” says Greig Craft. “Along with prosthetic care he will need multiple surgeries over the next 10 to 15 years to rebuild his genitals.”

“When we found out that he still had his testicles we could hardly believe it. We all cried a lot,” says Thien Nhan’s mom. “It was like God knew ahead of time that he would be bitten by wild animals and hid them inside his body.”

Despite the good news, various doctors have advised the family to consider gender reassignment. While plastic surgeons can create a penis that looks natural, they warn that the reconstructed organ will have 90 percent less sensation than normal. “We do not agree to turn him into a girl,” says Ms. Tran. “Thien Nhan’s character and way of thinking and behaving are very obviously male. If we changed him into a female and then found that in 20 years he couldn’t accept it, we would all feel terrible.”

Approximately one third of the boy’s penis remains intact and the family hopes that by the time he reaches adolescence, technology will have advanced enough to allow the reconstruction of a functioning, sensate penis. They are currently investigating advances in transplants and stem cell research.

Next month, the tot will return to Bangkok for more tests in preparation for surgery to create a scrotum and bring down his testicles. “We hope that if we can raise enough money and gain the support of pioneering doctors, Thien Nhan will one day become a fully functioning man,” says his mom. “Medical techniques keep improving with new research in tissue regeneration and organ transplants. He has defied the odds so far so why not continue to hope for the best?”