Adoption advocate Ann Vermeire: "Give them some parents, that's what they need first"

Aug 23, 2009 12:01AM
By Stephanie Benhart, sbenhart@qconline.com
Full article and photos can be viewed at:
http://qconline.com/archives/qco/display.php?id=454495&query=vermeire

Some people support causes they believe in. Ann Vermeire of Moline lives and breathes her cause every day.

She and her husband, Joe, are the parents of two birth children, Marc and Jon, and three adopted children, Kim from Vietnam, AMee from Korea and Travis from the U.S.

After adopting Kim in 1975, Mrs. Vermeire became active in adoption advocacy. Today, she stays involved by sponsoring Vietnamese orphanage children in their schooling. She also provides supplies to orphanages overseas and plans to return to Vietnam.

"It was the best thing I ever did," Mrs. Vermeire said of her involvement with adoption.

In August 1989, Mrs. Vermeire, Kim, Marc and Josh Lang -- Kim's future husband who also was adopted from Vietnam -- traveled in one of the first groups of American tourists allowed into Vietnam after the war. She said there were six adoptees in the group.

This April, the four journeyed back, almost 20 years later. But this time Kim traveled in spirit, as her ashes were transported to the country of her birth.

"When it came time to put her in a place, Ithought, what a perfect place," Mrs. Vermeire said.

Kim died in March 2008, after battling melanoma for years.

Mrs. Vermeire, Marc and Mr. Lang held a ceremony on a Vietnam beach. Mr. Lang took a portion of his wife's ashes in a small urn to Sacred Heart, the orphanage they visited on their first trip to Vietnam in 1989.

"She went back for a 20-year reunion and stayed," Mrs. Vermeire said.

While in Vietnam, they met with Son Michael Pham of Kids Without Borders at the Go Vap orphanage he sponsors. After meeting Mr. Pham, they were so moved by the children, Mrs. Vermeire said they went back the next day, going from bed to bed just to hold the kids.

"It brought me back to when Kim came home," Mrs. Vermeire said, fighting back tears. "You look at that little baby's face and see so much promise in their eyes."

They then traveled to DaNang, where they taught English to children at Sacred Heart and left Kim's ashes.

Through her years of advocacy work, Mrs. Vermeire has been able to travel and give talks advocating adoption and trying to change policies.

"A family is what a child needs, way ahead of any set of rules," Mrs. Vermeire said.

The "rules" she refers to are ones which require adoptive parents to be the same race, origin or culture as the child.

"Give them some parents, that's what they need first," she said, somebody they can sit on their lap and be loved."

However, Mrs. Vermeire said adoptive parents shouldn't deny their children their history, but be learning tools for their children. She volunteered at culture camps which teach adopted children about their birth culture.

"They had a story before you had them," she said.

She also has been involved in helping refugees and new adoptive families as well as traveling to places like Vietnam and the Dominican Republic. She helped form Ours thru ADOPTION, a nonprofit support group for families. Today, Mrs. Vermeire said, adoption agencies provide better services, offering support and streamlining the process.

She encourages others to help in any way they can, both in the U.S. and abroad.

"There are a lot of places to go, and they'd be glad to have you," she said. "There are plenty of children that are already here that need you."
Posted by all kids, one world ... at 6:56 AM No comments:

Tukwila (Washington): According to the 2000 census, 26 percent of Tukwila residents were born outside the United States and 32 percent spoke languages other than English at home, about twice the national averages. In 2006 the National Center for Education Statistics and the New York Times declared Tukwila's school district the nation's most "ethnically diverse". That merely means its student population is almost evenly divided among the four offical "races", white, black, Asian, and Hispanic. Other data are more telling: two-thirds of Tukwila's students speak languages other than English - a total of 65 languages - at home. Read more:
http://seattlemet.com/issues/archives/articles/refugees-0709/
Welcome to our new Kids Without Borders South King County Operation located in Tukwila/Seatac area. Our Hand Me Up program continues to grow.
View photos at:
http://www.flickr.com/photos/39932570@N06/sets/72157621977422729/
Posted by all kids, one world ... at 7:59 AM No comments: 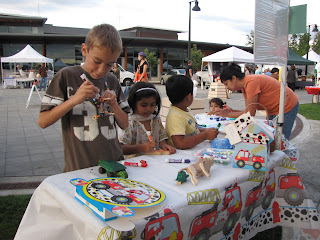 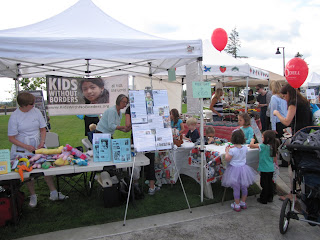 After 9/11 the United States admitted far fewer refugees - just 27,000 in fiscal year 2002, down from 85,000 in 1999. Nearly none were from Burma (or, as its military regime now calls it, Myanmar) ... In 2006, the United States admitted 1,323 refugees from Burma; 17 of them were resettled in Washington. Last year 18,139 arrived in the United States and 2,247 in Washington. Today the largest source of refugees entering this country and this state is not Iraq, Afghanistan, or another front-page trouble spot. It's Burma, a land most Americans know nearly nothing about. Read more: http//www.seattlemet.com/issues/archives/articles/refugees-0709/

Recently we were introduced to several leaders of the Burmese community in our area. Through these dedicated individuals, we were able to support many of the newly arrived Burmese refugees.
If you, or someone you know, are interested in becoming a foster parent to one of the refugee youths (teenage youths from Burma, Bhutan, Congo, Somalia, Sudan, and Honduras) who has fled civil unrest or persecution or been a victim of human trafficking, please visit http://www.refugeechildren.net/ to learn more or write to eberg@lcsnw.org .
Photos:
TOP: two Burmese refugee teen girls (from left), Pwint and Simon (right, leaders of the Burmese community in Washington State), visiting Kids Without Borders office/storage.

BOTTOM: new clothes from Kids Without Borders (our Hand Me Up program) came to these new refugees in our community. 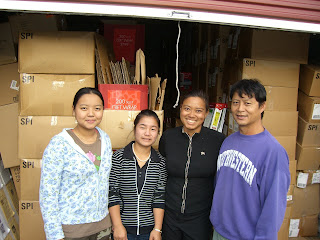 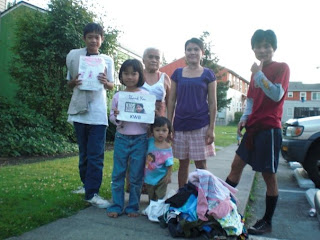