THANK YOU from Grenada ...

Dear Ms. Marshall,
On behalf of the children, the staff and the Board of Trustees, of the Queen Elizabeth Home (QEH), I thank you for your kindness.
Due to the increase of child abuse in Grenada and the need to help these children, we have been marketing for help to expand and renovate the Home. We receive calls on a daily basis from the Child Protection Authority (CPA) formerly known as Child Welfare Authority to house more of these abused children.
We have been blessed by Friends like you who have seen the work we do and have decided to help us with donations to assist with the daily operations of the Home.
It is my hope that sometime in the near future Kids Without Borders will be able to visit and see the work we do and the benefits which accrue from kind donations such as yours.
Once again my thanks.
Sincerely
Judy Victor, Asst. Manager 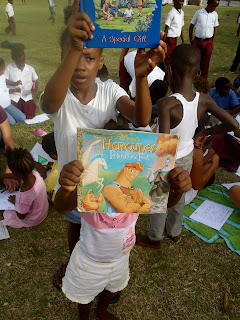 I have been back in Grenada for a little over a week and it's been an amazing return! I immediately picked up my participation in service by volunteering at the orphanage and with an after school program called LIMES. With the help of Kids Without Borders I was able to bring down three suitcases full of donations... one suitcase was delivered to the orphanage this past Monday. The Queen Elizabeth Orphanage was so very grateful for the donations and the time I invest once a week with the children.
Sincerely, 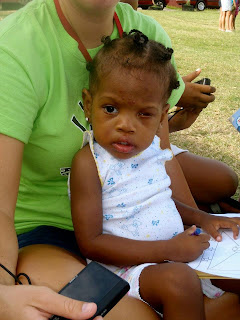 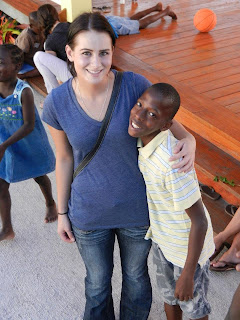 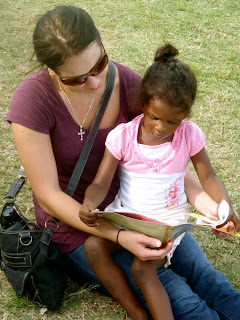 From Sammamish to Grenada 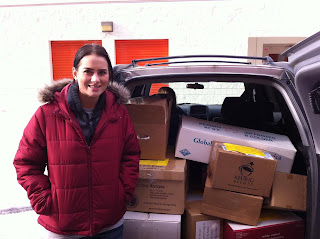 Returning to Grenada: Amanda Marshall (Rotary Ambassadorial Scholar and founder of Gifts4Grenada) in front of Kids Without Borders storage (in Sammamish, Washington) with 200 lbs. of gifts for orphans in Grenada. Amanda was home for a brief holiday break and left this week for Grenada with her extra suitcases. If you wish to make a donation to support orphans in Grenada: gifts4grenada
Posted by all kids, one world ... at 2:45 PM No comments:

Too young to make a difference? Meet Chloe, one of our volunteer. 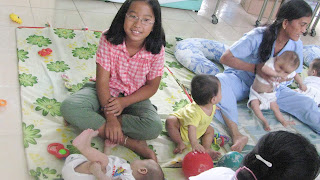 
Our first day at the orphanage was with Mr. Pham and some other volunteers that were involved with Kids Without Borders. I was mostly excited about seeing the babies and when I heard we would be able to feed them, I was even more excited! First we were given a tour of the orphanage. It was pretty big and had 3 floors and many rooms and hallways and courtyards. The little kids seemed happy to see us and we passed out candy. When we saw the babies they were on a mat playing with the nannies. I sat down and was able to pick up a baby. I was happy that she did not cry.


This is the doorway to the babies’ room. Every day we were at the orphanage, we went in here to feed the babies. Sometimes just my mom fed the babies because it was kind of hard to do. Before we would go into the room, we always washed our hands. It is important to keep the babies free from germs. First we would play with the babies on the mats for about 10 minutes then we would help move all the babies back to their cribs. After that, the nannies would pour milk into the bottles and put the bracelet with the name of the baby whose bottle it was on the bottle. After the baby was fed, the bracelets into a pile like this.


All of the children were so sweet and friendly and I loved them all! One of the babies was blind and had a heart problem. I don’t remember her real name, but we called her Rose because my mom thought her name in Vietnamese meant Rose in English. She was gone for 3 days while were there and she had a heart operation. All of us were so happy to see her back happy and healthy!


There were lots of other kids at the orphanage too like the hydrocephalus kids. Hydrocephalus is when fluid can’t drain from your head, which makes the skull grow larger than usual. In the room with hydrocephalus kids, there were other kids who had different disabilities as well. For example, there was a sweet girl named Hien that we called Dancing Girl because she liked to dance. Her feet turn inward and she walks on the sides of her feet, but she always had a smile on her face.


On our last day, there was a little boy who blew kisses to me and said “bye bye.” I don’t know if he knew it was our last day, but it was cute. Co Loan, the director, invited us to a lunch of noodles, spicy and non-spicy nuoc cham, also some tofu and a green stuffed vegetable soup and some really good orange juice. Also she gave Lilly and I a pretty pencil pouch. Lilly’s is grey and mine is red with a pretty flower design.


Overall the orphanage was an amazing experience and I will always remember it. I hope to revisit sometime in the summer. I am thankful to Mr. Pham for giving me this opportunity. 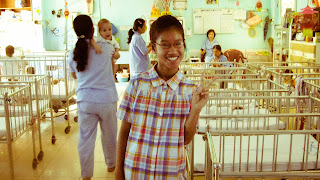 Volunteering at the Go Vap Orphanage

Hi! My name is Lilly Kilguss and I was adopted from Viet Nam when I was a baby. I have a brother and sister from China and I am the oldest in my family. I recently went to my home country, Viet Nam, for two months and yes, the trip was amazing! My sister came along too and of course my mom. While we were there, a big part of what we did was volunteer at the Go Vap Orphanage.

When we arrived at Go Vap, we were all invited inside for tea by the director, Co Loan, who was so nice! Chu Son gave us a talk about what to expect inside the orphanage. Everyone brought something for the kids: Paper, notebooks, pens, pencils, scissors, candy, etc. Then, we took a tour of Go Vap. First, we went to a little room with about 10 to 15 kids about the ages of seven to ten. We brought gummy bears and Swedish fish that we passed out to the kids. The kids seemed really happy to get candy and were smiling and jumping around!

As soon as we were finished with meeting the little kids, we met with the hydrocephalus babies and some other sick kids on the second floor. We just walked around the first day but we would visit these sweet kids every day we were there. There were little designs such as characters from the Jetsons and Aliens on the ceiling because these kids are always in bed. Lastly, we headed to the newborn babies room where played with and fed the babies. All the babies in that room were so incredibly adorable. There was this one baby that I found so incredibly cute and adorable combined! His name is Kien! Kien has the cutest smile and laugh I’ve ever heard a baby laugh!


Well afterward, we said our goodbyes to the rest of the volunteers and we headed back to the hotel. After that, we pretty much had a daily routine of teaching there: First, we would sing songs to the little kids; after that, we would visit the hydrocephalus babies and comfort them; and lastly, we would feed the babies and then leave.

In the baby room, there was also a little boy who was 5 years old but very small. I think his name was Phuoc. This is his picture (see below). He liked to play with my glasses and he had a cleft lip that was repaired. My brother also had a cleft lip when he was born. Also there was a little girl named Nguyet who was the cutest thing ever and also had a cleft lip that was repaired. A lot of children get surgeries at the orphanage. For example, we met the Victory Baby that Chu Son helped to receive a surgery. He liked to ride his bike and also slide down the slide. He is very quiet because he cannot hear and he does not talk but it is fun to make him smile.

In fact, seeing all these kids every day and their awesome smiles just made me happy too. This group of boys was so much fun to see and were always happy to see us. They especially liked to sing along with the guitar that we brought with us. Working at the Go Vap Orphanage is one of the best experiences I’ve ever had because it was giving something to others. I know the kids may not have a lot because they are in the orphanage, but they just seemed like regular kids and I did not feel they were very different from me. A lot of the kids had some sort of a difference like their fingers stuck together or could not walk and had special chairs. After the first few days there, I just got used to it and it seemed like normal.

Son Michael Pham is doing an awesome job helping these kids in every possible way he can. I hope I can change the futures of some kids like him like maybe helping the babies with hydrocephalus because they are in their bed all the time.

On our last day at the orphanage, Co Loan had a special lunch for us and another volunteer from Sweden. I felt very sad to leave the orphanage and to leave Viet Nam, which is such a beautiful country. I really miss the kids now that we are at home and I hope to return to the Go Vap Orphanage again soon. 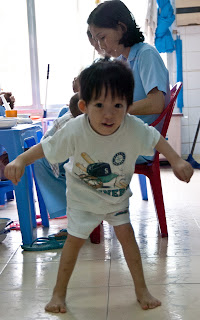