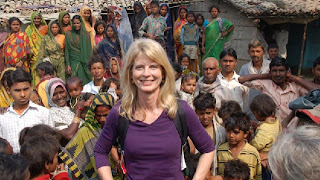 Our very good friend from KIRO Television (CBS - Seattle) Penny LeGate is on the road again. This time: India.
India has taken a new place in America's consciousness, thanks to the huge success of the small budget movie, "SlumDog Millionaire." ... follow Penny's travel blog:
http://www.kirotv.com/station/18675726/detail.html
About Penny: http://www.kirotv.com/contact/1868168/detail.html and her current assignment (Going Green Northwest): http://www.kirotv.com/goinggreennw/index.html
Posted by all kids, one world ... at 6:29 AM No comments:

A Journey On Common Ground 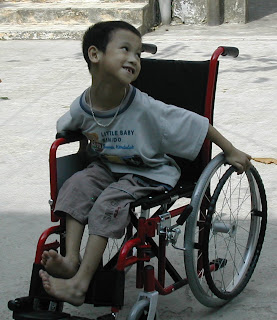 Ken Behring and David Behring were in Seattle this week for business and I was able to meet up with them. Ken founded the Wheelchair Foundation and David is the President. Kids Without Borders has partnered with the foundation and Rotary clubs in District 5030 for many years, providing wheelchairs to many countries around the world: Guatemala, Honduras, Fiji, Peru, Ethiopia, Uganda, Viet Nam, ...
Many Rotarians came to an informal gathering with Ken and David for a discussion on partnering in future wheelchair distribution. Through the efforts of Mike and Alex Shimizu (KWB Global Ambassadors), more than 4,000 wheelchairs were distributed in partnership with the Wheelchair Foundation, Rotary, Pro Sports Club (Seattle and Bellevue), and Kids Without Borders.
A few years ago, David joined me in Viet Nam to deliver new wheelchairs. We traveled throughout the country from Hanoi to Saigon to distribute three containers of new wheelchairs. Remarkable achievements have made by the foundation; just before the end of 2008 the Wheelchair Foundation has provided 750,000 worldwide.

Friends: enjoy this short video (via the link below) and the beautiful music that accompanies it. It was produced by my good friend, a very talented professional photographer. Three years ago, he returned to Viet Nam with me on one of my HumaniTours, this time with his teen daughter. 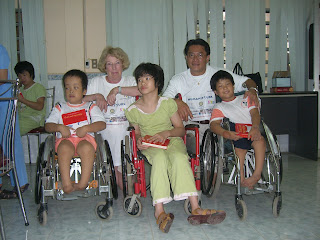 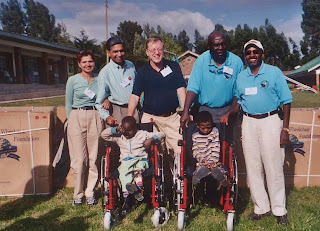 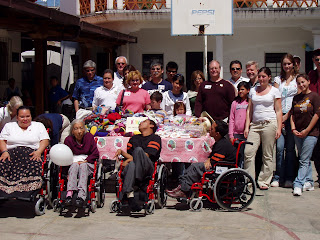 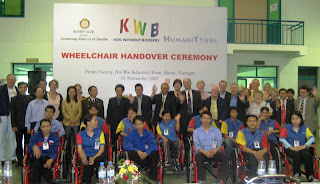 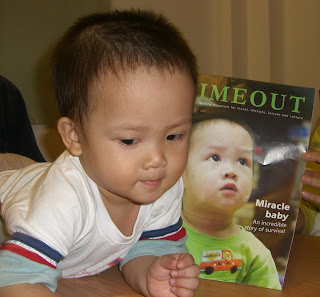 In March it will be one year since Thien Nhan was officially adopted by Mai Anh and Nghinh. At just 19 months old he began his new life. The article below came out in June 2008 and Thien Nhan' story became known worldwide.
July 2008, team Thien Nhan (Greig Craft, Asia Injury Prevention Foundation; Na Huong, Protec Helmets; Elke Ray, Bubbafish; Son Michael and Judy Pham, Kids Without Borders; and Thien Nhan's adoptive parents) met in Hanoi and worked on a plan to get Thien Nhan needed medical treatment.
August 2008, the family traveled to the U.S. to begin Thien Nhan's medical treatment. After a brief stop in Seattle, they traveled to Dartmouth Medical Center in New Hampshire.Next was the Rehabilitation Institute of Chicago, followed by a brief recovery in California. This gave the family a chance to visit Little Saigon - one of the largest Vietnamese community outside of Viet Nam.
Since June 2008, many people around the world learned the remarkable story of survival of Thien Nhan, the Miracle Baby. He has made so many friends. One of his biggest fans is Lee Chee Chew, a comic artist of the Sunday Times in Singapore. Artist Lee Chee Chew has raised more than US$30,000 to cover medical related expenses for Thien Nhan through his web blog (http://www.chewonitcomics.blogspot.com/) and his newspaper comics strip.
Another effort to support Thien Nhan is through the sale of Bubbafish toys made in Viet Nam. Mai Anh and Elke (team Thien Nhan) created this attractive toy line made by poor craftswomen from remnant fabrics. Part of the proceeds from the sale of Bubbafish is donated to Thien Nhan's fund for medical related expenses. In the U.S, Kids Without Borders introduced Bubbafish at the Tet In Seattle festival and raised funds for Thien Nhan. More information on Bubbafish can be viewed at http://www.bubbafish.com/.
To follow progress of Thien Nhan, visit: http://help-thien-nhan.blogspot.com/ .

Abandoned at birth by his teenage mother in an uninhabited area of Quang Nam province, Phung Thien Nhan somehow survived, despite all the odds.
Phung Thien Nhan was born on July 15, 2006. His mother was just 17 years old and had no desire to be burdened with this child. Instead she covered the newly born infant under a pile of papaya leaves and bamboo and left him to fate. Somewhere on the side of a hill in Tam Thach commune, Nui Thanh district in Quang Nam province he laid for three days until a group of locals came across him.
Tragically, he had been mauled by an animal, probably a dog, and lost most of his right leg, testicles and penis. When he was rushed to a nearby hospital, doctors had no choice but to amputate his leg at the hip. The fact that he survived is however nothing short of miraculous. It was there that he was named Thien Nhan (Good person) by visiting Buddhist monks.
The doctors did their best to stabilise Thien Nhan but the hospital couldn’t afford to keep him. Nui Thanh district’s police launched an investigation to discover who had abandoned this baby. Eventually the mother’s family was tracked down – at this stage the young mother had taken off. Her parents lived in abject poverty and could barely afford to feed the child let alone provide adequate medical care or finance his rehabilitation. Yet astonishingly, the local authorities decided to return Thien Nhan to his birth mother’s family.
A kind soul
Word of Thien Nhan’s tumultuous first few days in the world had got out and it was even covered by national papers. After the story faded from most people’s minds, one journalist from Hanoi, Tran Mai Anh couldn’t stop wondering what had befallen the child, especially now that he had returned to the very family that had abandoned him.
Eventually Mai Anh decided she would try to find him and in December 2007 with the help of her friends she tracked him down in his family hut in Tam Thach. To say the condition he was in was a cause for alarm is a massive understatement. He was completely neglected, dirty, anaemic and suffering diarrhoea.
Mai Anh took it upon herself to take Thien Nhan to a medical centre where he could get urgent treatment. Then in March this year she made arrangements to adopt him and brought him back to live with her and her husband, Phung Quang Nghinh, and their two sons in Hanoi. “He escaped by a hair’s breadth and now he has the right to live like many other children,” says Mai Anh. But of course considering the extent of Thien Nhan’s injuries Mai Anh knew he would require more extensive treatment.
Day to day
At their house Nhan blithely plays with his toys. He is too small to understand the extent of his injuries. He is in fact a happy-go-lucky child. When his mother returns from work he embraces and kisses her. He likes to play with his brothers and recently he rushed to the defence of his older brother Minh when a bigger kid was bullying him. When he’s in the living room with one hand on the bedside, he stands up and waves with the other hand to everybody watching him.
This kid is a fighter. But Thien Nhan needs specialised physio to ensure the health of his good leg, stump and spine. As he is growing he also needs to get extensions to his prosthetic leg, which he received thanks to the generous support of VietCot, a locally-based German funded charity. In the evening he sometimes moves around without it. He drags his body around with his arms and sole leg at an amazing speed. He is proving to be a robust young boy, but he still requires extremely complicated medical treatment.
Doctor Joe Rosen of Dartmouth College in New Hampshire in the US, has agreed to oversee Thien Nhan’s complex genital reconstruction, which will, if everything goes to plan, take place in stages over the next 10-15 years. After reviewing reports and images of Thien Nhan’s injuries, several large hospitals had expressed regret that they would be unable to rebuild a functional penis.
Dartmouth, however, is doing pioneering research in tissue-reconstruction, and these techniques offer hope for Thien Nhan. When he gets to the US, Thien Nhan will also travel to Chicago where he will be examined by Doctor Childress, a leading expert in prosthetics. Mai Anh is hopeful that by mid-August this year, Thien Nhan will be able to travel to Dartmouth.
The US hospital has generously offered to help with fundraising for the surgery but Mai Anh and Nghinh will also step up their own fundraising efforts in the hope that Thien Nhan can have the best possible treatment available. His story has been already been featured in international papers, he has appeared on Vietnamese television and he’s even got his own Facebook page going!
Recently generous donations have been made by Asia Injury Prevention Foundation, an illustrator Lee Chee Chew from Singapore, Voice of Vietnam and kids from Doan Thi Diem School as well as Nhan Trong School in Hanoi. On her blog Mai Anh describes how one day a construction worker turned up at her with VND100,000 to donate. “I hate to think how long he had to work in the sun and rain to earn that money,” wrote Mai Anh. But Thien Nhan still needs all the help he can get. If you would like to find out how you can get involved or would like to make a contribution to help pay for his medical care, rehabilitation and education, check out his blog at www.help-thien-nhan.blogspot.com. On this regularly updated blog you can also keep up to date with this brave little boy’s day-to-day progress.