Teach Me To Fish 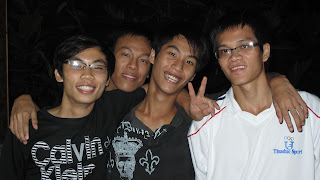 We talked in a small restaurant over rice and fish. In many ways the four brothers are like young men anywhere in the world. Duong Kim Thao, 19, is about to take his university entrance exams in June. Tall, handsome and a natural athlete, he seems more excited about being elected captain of his school soccer team than he does at the prospect of more school. Nguyen Van Nghia, 18 years old and as unlike Thao as two brothers can be, is taking his exams much more seriously. He has just ranked first in natural science, math and chemistry in his school and plans to study banking in university. He prefers comic books and music to soccer and swimming. Tran Ngyuen Hoang Phi, 17 and the baby of the group, lets his big brothers do most of the talking (though he does manage to do most of the eating). All three look up to their oldest brother Huynh Tung Hieu who, at 19, is the first one to attend college. He is a serious boy with thick rimmed glasses and serious interests – engineering, books and newspapers are his bread and butter.

However, in one important regard they are very different from young men in much of the world. The boys are orphans and brothers in spirit if not by blood. Their experiences, their challenges and their victories provide an insight into a less regularly examined part of the life of a Vietnamese orphan – leaving the orphanage and carving a new identity and a new place for oneself in Vietnam’s status and family focused world.


The importance of family is hard to overemphasize anywhere in the world and no less so in Vietnam. Responsibilities, identities, duties, marriage, schooling and jobs often revolve around the complex network of family connections that keep the culture, neighborhoods and industries of Vietnam humming. Wealthier students not only attend elite schools but are able to access afterschool programs in English, science, math and a host of other subjects. And looming over every Vietnamese student hoping to enter this country’s growing middle class are the all important National University Entrance Exams held each year in June and July. For the college bound, their scores on these tests can define the rest of their and their family’s lives. Families save and borrow to send their children to the best test prep academies.


The four brothers have none of these advantages. Coming from a world of dedicated but impossibly overworked teachers and nurses, there were no extra classes, tutors or foreign teachers to help these boys perfect their math, science or English pronunciation. Yet, while their material conditions may be limited, there are no bounds to these young men’s aspirations.


The oldest, Hieu, has already passed his exams and is completing a degree in engineering and architecture. While modest and humble, he says he remembers every person who has ever helped him, it is clear that his own work ethic and talent are the source of his academic success. Nghia, with the highest scores in his school in science, math and chemistry is not far from college himself.


All four boys mentioned that adult sources of inspiration, advice and motivation were few and far between. While most mentioned that they appreciated their teachers they noted that in Vietnam’s conservative culture, teachers felt it inappropriate to discuss the personal problems or lives of students. A teacher is an instructor more than a friend or mentor. When asked about heroes and role models, the brothers all pointed to other children in the orphanage. Successful orphans became role models and older children offered not only academic help but advice on life, mortality and the all important transition to life outside the orphanage.


With 18 year olds given the impossible task of teaching 14 year olds how to be a man, it’s no surprise that the boys could think of numerous instances in which they had intentionally attempted to provide a good role model for the younger children. Of course they wouldn’t be children without plenty of stories of sneaking extra food, stealing candy from the teacher’s office and sneaking out after curfew to go swimming at the neighborhood pool.


But talking to these young men, one is struck by their commitment to building a community. Helping elders in the community and assisting victims of automobile accidents were good actions not just because they helped the people in question but because they helped to teach the younger children the difference between right and wrong.


When asked how they had managed to achieve success in school and life more generally, the boys pointed to many factors. Hardworking teachers. Good friends. Older students. Their own desire to prove they could succeed. And they mentioned the impact of volunteers from across the world that they had met as they grew up. The friendship, advice and glimpses of a wider world that volunteers had offered over the years all clearly mattered enormously to these young men, even when the volunteers were there only briefly.


Son Michael Pham, founder of Kids Without Borders (KWB), has personally mentored these young men and women and walked with them from the orphanage into the world outside. KWB Teach Me To Fish program has connected hundreds of volunteers from around the world with these youth and has lent them a hand when they need one to lean on.


As they leave the orphanage and attempt to carve their own way, these young men will wrestle with many obstacles that lie in their path. But as difficult as life is for a Vietnamese orphan, their friends, foreign volunteers and their ‘family’ of brothers will have served them well. They go into the world armed with confidence, good friendships and a stronger sense of family. What happens next will be up to them, but Son Michael has the utmost confidence that these young men and women will manage the tough roads in front of them.


To learn more about Kids Without Borders Teach Me To Fish Program and how you can support/contribute, please contact us at info@kidswithnoborders.org
Posted by all kids, one world ... at 3:17 PM No comments: