Letter from one of our volunteer, Rena. Rena (on right in photo) spent her summer vacation volunteering at the Picasso Thu Duc Orphanage (Saigon, Viet Nam) on behalf of Kids Without Borders. Rena has returned to the U.S to finish her study at Harvard. 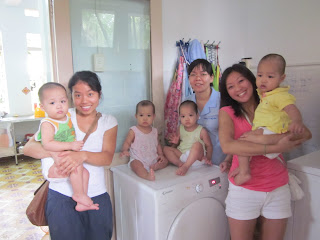 I had a wonderful time volunteering at the orphanage. My time there consisted of teaching conversational English lessons to the older kids and feeding and playing with the infants and toddlers. Each experience was valuable in its own way.

With the younger kids, I was able to light some smiles on their faces just by picking them up or making silly faces at them. They really longed for attention, and I was glad to be able to provide them with that.

I also enjoyed teaching English to the older kids, who were around my age. Although we came from completely different cultures and backgrounds and had somewhat of a language barrier between us, I got to know my students pretty well. They eager to both learn English and befriend us. We focused on teaching informal, conversational English by playing fun games and facilitating casual conversations. I had an incredibly fun time with the students both inside and outside of the classroom, and they really helped make my first experience in Viet Nam a unique and memorable one.

Thank you for a wonderful experience, I hope this opportunity will continue to touch the lives of the many volunteers following me!

Note: above photo, Linh (left) and Rena (right) with a caretaker and children of the Picasso Thu Duc Orphanage. They arranged for the purchase of a new dryer in the photo for the infant ward. Fund for this dyer was provided by the Lantern Projects (California).
Posted by all kids, one world ... at 11:51 AM No comments:

Labels: Picasso Orphanage, Power Of One, Saigon, Teach Me To Fish, Volunteer

Kids Without Borders Power Of One 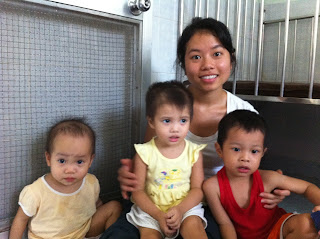 Today was my last day meeting with my students and the children. I haven't left Vietnam yet, but my heart feels heavy and sad inside. Although the time I had was short, it was such a wonderful and beautiful experience,  definitely one of the best times I had working abroad.

Many of my students gave me goodbye gifts. I feel so grateful, but I am also worried that they have spent money to buy me gifts. They are so thoughtful. One student, Mai, wrote me such a touching letter saying that all he wished was for Rena and me to come visit them every summer but stay longer than this time. The students have really enjoyed our English lessons and I am glad to have helped them in some way. I will miss them all dearly. Please update me on their lives and such when you come in November.

As for the children, I could not bear to put them back in their cribs today. Everyday, I have been seeing them. Their faces brighten up as they see Rena, Canh, my cousin, and me at the door. They jump up and down to greet us. At the end of each day when we try to put them down in their cribs, they whine and cry. All these children need is to be be cradled and held and they can never get enough. Often, we try to stay with them a little longer to get them to stop crying. But today, I did not stay longer because I knew that I would cry if I did. It is always hard to say goodbye to people you have connected and bonded with.

Thus, I would like to sincerely thank Chu Son and the organization, Kids Without Borders, for providing this once-in-a-lifetime experience for me. I am not certain whether I have made an impact or a difference at the orphanage, but it has certainly made an imprint in my heart. This experience has further inspire me to not only become a pediatrician, but to also continue volunteering even after I become a doctor. Again, I thank you with all my heart. I hope that someday I would be able to volunteer with Kids Without Borders again.

Labels: Picasso Orphanage, Power Of One, Saigon, Teach Me To Fish, Volunteer

Early this morning we learned that the Taylor Bridge wildfire between Cle Elum and Ellensburg has destroyed more than 60 homes, killed unaccounted animals (cows, horses, and other livestock) and scorched so far more than 28,000 acres. 900 people have been evacuated, and many are working to save their homes by whatever means they have.

After several text messages and a phone call, KWB volunteers Katrina and Son Michael met up at Kids Without Borders office/storage in Sammamish. They loaded their vehicle with boxes of new children clothes, shoes, baby products, ... The car was packed to the maximum with enough space left for a driver and one passenger. Driving on I-90 through Cle Elum, the wildfire was visible from the highway. They arrived in Ellensburg in one hour and stopped at one of the designated fire relief centers. 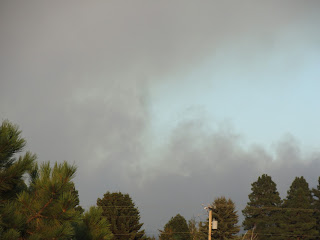 Follow their day of service via: Kids Without Borders
Posted by all kids, one world ... at 7:08 AM No comments:

Labels: Hand Me Up, Power Of One, Volunteer

August 12th is International Youth Day.
Kids Without Borders salutes all youth volunteers who give themselves to serve others in their community and around the world. 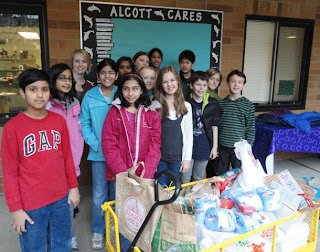 Every two months, KWB organizes a work party at the Ronald McDonald House in Seattle. Our volunteers join members of the Rotary Club of the University District (Seattle, Washington) preparing and serving dinner to children and families. As usual our volunteers do not come with empty hands. We distribute new children clothes and footwear, toys, and various essential daily supplies. These items are procured year-round by our volunteers, sorted, and packed for distribution.

It is during our visits when we meet many seriously ill children and their families going through the most difficult time of their lives. We want to share with you one of the many stories, of twelve year old Lauren Selden.

If you wish to participate in Kids Without Borders product drive to support the Ronald McDonald House or other KWB programs and projects in our community and in other part of the world, please contact us at info@kidswithnoborders.org . 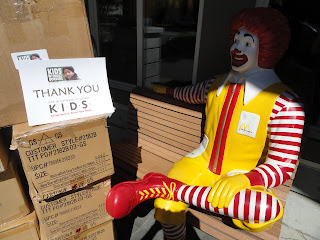 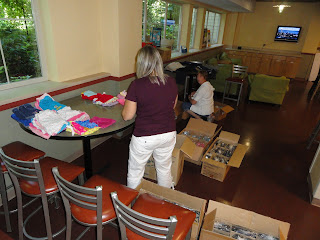 August 10, 2012
By Barbara Fahs
Twelve year old Roarin’ Lauren Selden returned to Hilo on Wednesday, July 25 after a long, tough year in Seattle, where she was treated for cancer. A group of about 30 sign-carrying friends and family greeted Lauren and her parents Todd and Piper, older brother Tedd and doggie Skittles at the airport. Many members of the Paradise Roller Girls and Big Island Babes Junior Roller Derby were present to welcome their teammate home.
“We learned of Lauren’s cancer in July 2011, just after her eleventh birthday,” her mom, Piper, said. “It was a particularly rare, fast-growing bone cancer known as Ewing’s Sarcoma. Whatever we were going to do, we had to do it fast. Although we moved to Hilo from Portland in 2003, both my husband and I still have family in the Pacific Northwest. They helped us connect with Seattle Children’s Hospital, which has specialists in Lauren’s type of cancer. We flew over within three days of receiving the diagnosis. I ‘quit my life’ in a single weekend – my graduate studies, teaching jobs, my business “Hawaii Rainbow Worms,” everything – to dedicate myself to Lauren’s healing.”
Ronald McDonald House Provided Needed Support
The Seldens stayed at the Ronald McDonald House during their time in Seattle. “We couldn’t be more than one hour from the hospital at any time,” Piper explained. “The ‘Clown House’ is an amazing place – a supportive environment where everyone with a critically ill child is on the same page. We met some folks who I know will be lifelong friends.”
Lauren’s treatment consisted of six surgeries, including the replacement of her left femur. That, plus ten months of intensive chemotherapy, resulted in the complete eradication of her cancerous tumors. Lauren reports that her friendships with the other children at Seattle Children’s, two of whom had the same type of cancer, were “the coolest part of the whole experience. Only two in a million get this kind of cancer, so to be able to compare notes (and complain!) with other kids was so important to me.”
Viral Video
Lauren added. “The other cool thing that happened while I was there was when another patient, an older boy named Chris Rumble, made a video of us kids and some of the nurses lip synching and dancing to Kelly Clarkson’s song ‘Stronger.’ Chris put it up on YouTube and it went viral! I think it’s gotten over two million hits by now!”
Social Media Connected Friends and Family

“Of course this experience was hard for the whole family,” Piper added, “but we were really helped by the caring and support of friends and loved ones — even people we didn’t know. Through Facebook and a blog called Caring Bridge, we communicated what was happening with Lauren, as well as some of our hopes and fears. I love to write, so posting was therapeutic. The love we received was heartwarming and so encouraging. Like we aren’t alone because so many people care.”
What Does the Future Hold?
Lauren’s prognosis is good, but trips back to Seattle every three months will be necessary for the foreseeable future. After the first year or so, the visits will become less frequent, “but we’ll have to return periodically for at least five years,” Piper said. Ever positive, Lauren added, “I’ll be back to skating with Big Island Babes before you know it.”
More Info:
“Stronger” video: www.youtube.com/watch?v=ihGCj5mfCk8

The Seldens have set up two accounts where people can make donations to Lauren’s ongoing medical expenses:
PayPal: Send contributions to Lauren@PiperSelden.com (click the “personal gift” option to avoid a service fee). Any Home Street Bank: just give Lauren’s name.
Posted by all kids, one world ... at 11:56 AM No comments: